Home
On the ground
Source of inspiration
Florence Brunois-Pasina 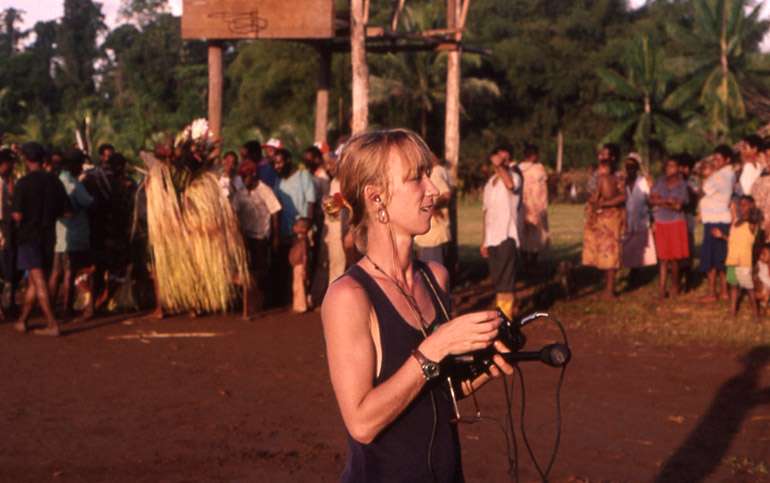 Ethnologist and CNRS researcher Florence Brunois-Pasina works at the Collège de France as a member of its Social Anthropology Laboratory and as a Chair of its Anthropology of Nature team. Here, she gives us a glimpse of her vision of the plant world, both as an ethnobotany specialist and a teacher.

First of all, what is your relationship with the Yves Rocher Foundation?

We have very strong ties, and I have been bound to the Foundation from the very beginning because I was the first researcher to be granted funding by the Foundation. They trusted me back when I was just a young PhD student setting off for New Guinea. It remains hugely significant to me, and I am so very grateful to them.

I hope to instil in my students a passion for living alongside plants.

How does your work echo the Foundation’s values?

I work in tropical forests, where vegetation is omnipresent. So that’s a first, very obvious link with the Foundation: a love of living alongside plants and the idea of going beyond a merely utilitarian approach to them. It’s about showing empathy and generosity to both plants and humans. I also share the Foundation’s commitment to sharing knowledge through the Terre de Femmes Award, for example, which raises awareness of the links women have with biodiversity. Similarly, I try to instil in my students a passion for living alongside plants.

There is another, different way of existing as a human on this planet.

You have been conducting in-the-field research for a long time now, particularly in Papua New Guinea among the Kasua. What have these communities taught you?

I had to unlearn everything I thought I knew before I could really start learning from them. And what they taught me revolutionised the way I think: they simply showed me a different way of existing as a human in this world. Plants and animals play a very big role here because the Kasua’s social structure incorporates these living beings into their systems. Trees are seen as alter egos to be treated in the same way as any human. The same goes for animals. In the world I come from, plants and animals are relegated to the status of objects, possessions and things to be domesticated, transformed and manipulated by humans. With the Kasua, I discovered a world in which the Other, the non-human, is a being in its own right that requires interaction.

The relationship is particularly striking when you focus on the sounds made by these beings: when the wind blows, when the trees rustle or groan, etc. The spirits lend their voices to fill the silence of these non-human beings. The human identity of the Kasua draws on more than just the human. And that’s the filter through which I presented my work: there is another, different way of existing as a human on this planet.

How does an attachment to nature change who we are, do you think?

I think the current problem is that we no longer coexist alongside the rich variety of different non-human beings. The issue is twofold: creating these relationships in a hyper-urban world, and the paradox of rural settings in which the natural world is being industrialised. But attachment is all about intimate relations; it requires affective, emotional ties with nature, a desire to preserve the Other while protecting oneself.

You run ethnobotany workshops for the EHESS in Salagon with the Yves Rocher Foundation’s support. First of all, what is ethnobotany?

The term ‘ethnobotany’ describes the study of humans’ relationships with plants. But I’m not a fan of the word because it emerged alongside colonialism. Botanists and engineers were dispatched to Africa to discover plants that could be useful in terms of development. It was yet another utilitarian approach to botany. I prefer the term ‘botany of the Other’, or ‘the botany of Each Other’.

Their minds are blown by the workshop. They suddenly start seeing an entirely new world.

How do you get this concept across in your workshops in Salagon?

I start by letting them play around with the established ways of thinking, because that’s what’s convenient for them, and then I break it all apart. I explain that a plant can be more than just a useful object, that every plant has a personality, and can affect our emotions and feelings. That’s where the ‘ethno’ comes in: I shine a light on other, non-scientific systems that are scientific nonetheless, because new things have been coming to light over the past two years, such as the idea that plants are sensitive, intelligent and have memories. In any event, for the students, the impact is extraordinary. These are young people from an urban background who are politics or economics students, and it’s as if they suddenly start seeing an entirely new world. Their minds are blown by the workshop, they come out of it transformed. They start considering plants and incorporating vegetation into their studies, and sometimes even their career plans. It’s magical!

How are the workshops structured?

The workshops in Salagon are very intensive ten-day courses. I start by introducing students to the world of plants via Western botany. I then send them off to experience a connection with any plant they like (a tree, a plant, a herbaceous shrub, and so on). I ask them to draw it, spend time with it, take the time to feel things, to identify its emotions, colours, senses, smells… And every year, the theme of the seminar (attended by guest ethnologists) is different. This year, for example, the theme was ‘How do plants help us interact with the invisible?’. At the end, they complete what we call a ‘field study’ and submit a group dissertation investigating the issue.

Finally, what would your message or advice to young people and the rest of us be?

Are you also working on a project that fosters biodiversity, and has a positive social and environmental impact? Do you need some support to take things further?